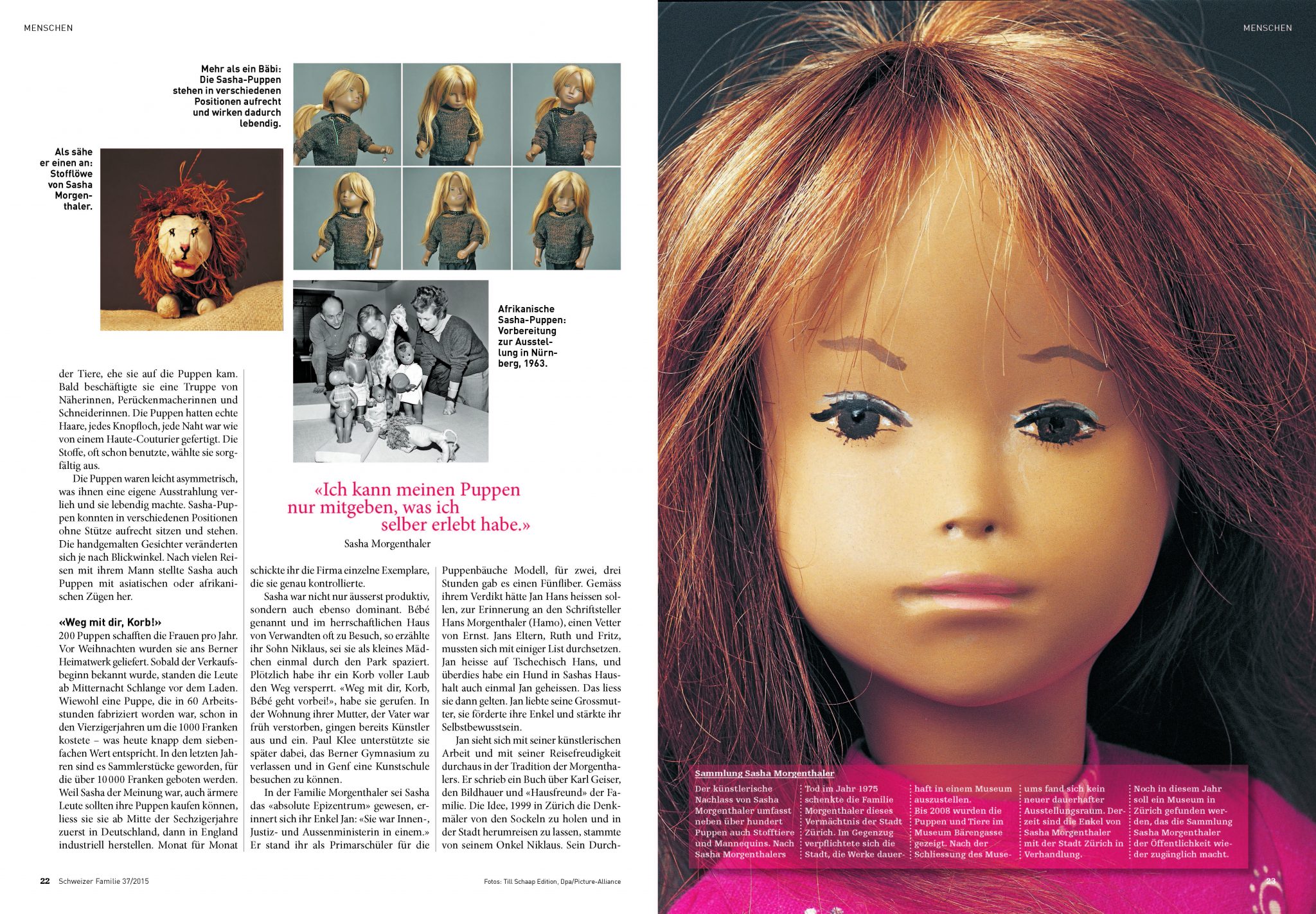 On the occasion of an exhibition at the Art Museum in Thun, Marianne Fehr, editor of the weekly Schweizer Familie magazine, examined the history of three generations of the Morgenthaler family.

(Lead) “Sasha invented the world-famous Sasha Dolls, and Ernst was a renowned painter. The Morgenthalers and their friends were an influential circle of Swiss artists for decades, and their work resonates to this day.” — “[…] Sasha’s grandson Jan remembers that Sasha was the Morgenthalers’ ‘absolute epicentre’, and that ‘she was Home Secretary, Attorney General and Foreign Secretary all in one.’ As a primary-school child he served as the model for dolls’ bellies, and he received five Swiss Francs for two or three hours of modelling.”

A pdf of the article can be downloaded here. 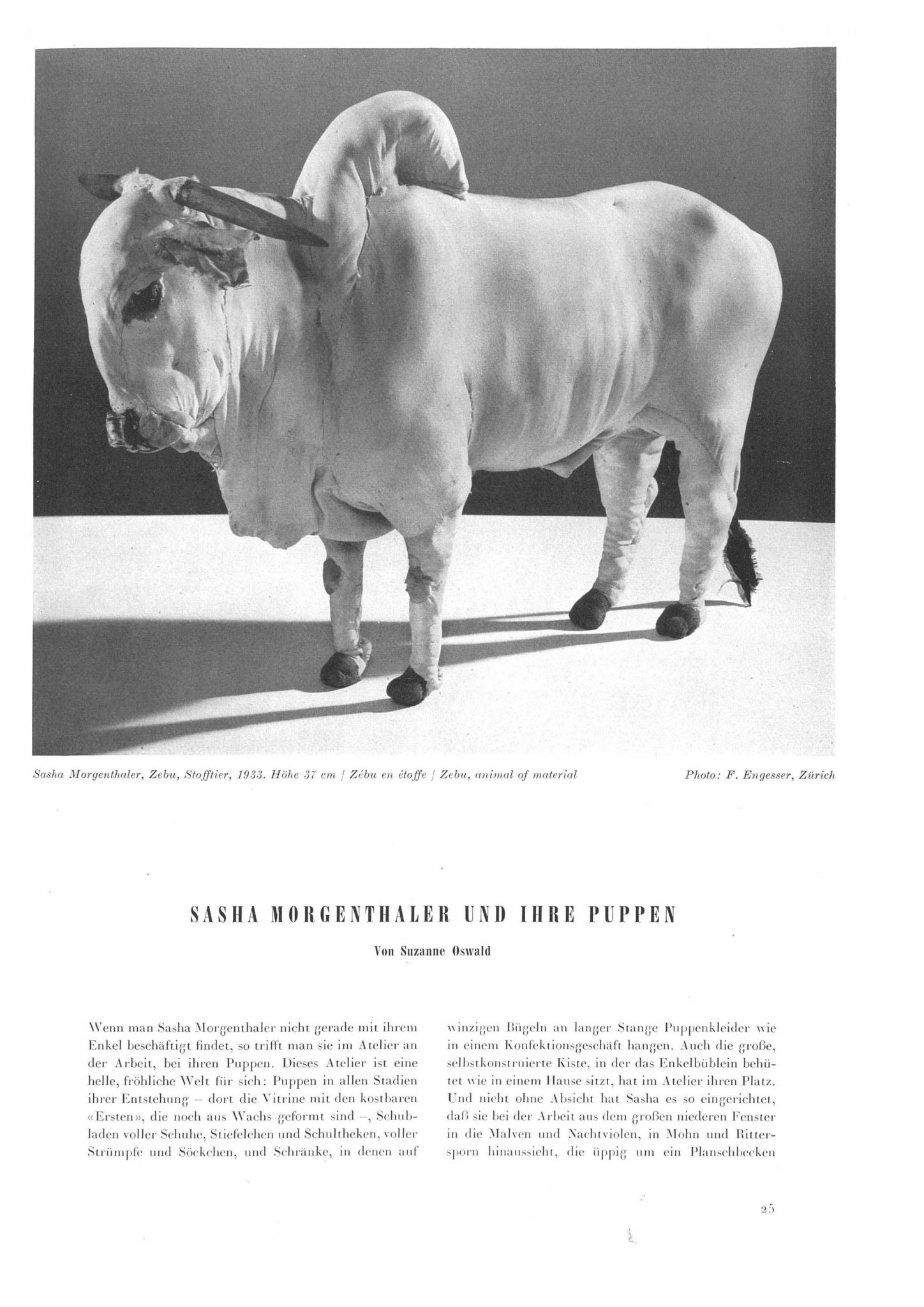 “Sasha makes her dolls with concrete intentions in mind. She had always had ‘the quirk that good dolls would help teach children to be more humane’. Possibly because dolls that look so human force children to treat them with care. Or possibly because a sensitive child can establish a relationship with a Sasha Doll that is characterised by intimacy and significance, thereby fulfilling Sasha’s intentions.”

A pdf of the article (only in German) can be downloaded via e-periodica (ETH Zurich). 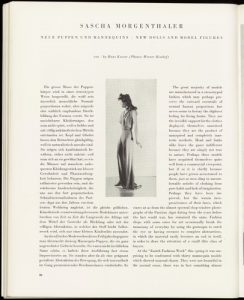 In this first edition of the Graphis magazine, the author writes about Sasha Morgenthaler’s model figures that were exhibited at the Zurich Fashion Week and connects them to her dolls. Includes black-and-white photos by Werner Bischof.

“At the ‘Zurich Fashions Week’ this spring it was surprising to be confronted with thirty mannequin models which showed unusual charm. They were not beautiful in the normal sense, there was in fact something almost improvised in their design.”

The article can be read in the International Advertising & Design Database (IADDB) and saved as individual pages. The entire volume is available in digital format on the website of the Graphis magazine.

An incomplete list of links which can be extended as necessary.

www.sashadoll.com — Susanna Lewis’s extensive homepage with information on Sasha Dolls, a list of links, bibliography, and more. Her books on the Sasha Dolls can be ordered here.

www.sasha-puppen.ch — Web page by Steffan Biffiger, art historian and art critic, the author of several artist monographs on (amongst others) Ernst Morgenthaler (www.kunstundbuch.ch), as well as the executor of Ernst and Sasha Morgenthaler’s estate in Thun. The web page mainly presents photos of dolls.